So where the hell is Stanage Bay?   The locality map hereunder should enlighten all, it being approximately 220kms NNW of Yeppoon just to the north of the Shoalwater Bay Military Reserve.

Stanage Bay's reputation as one of the best isolated fishing Mecca's is matched only by its equally infamous access road consisting of approximately 100kms of bone-shaking corrugations, potholes and  treacherous cattle grids.  The irony of the  following article appearing in our local paper the day we returned from our trip was not lost on our shaken group.

A group of 9 of us arranged  to book the Barra Lodge (www.barralodge.com) at Stanage for  5 nights at a very reasonable tariff of $200/night.  The Lodge comes equipped with fully functional kitchen, 2 x 4 bed bedrooms, Bar B Cue, Pool Table and Swimming Pool (summer use only- except for the southern hardies).  The group comprised ourselves, plus Harry Stapleton, another couple from Yeppoon (Des and Dianne), Neil McDonald, his partner Lettie and their 10yr old daughter Lecides plus Les - all friends of Harry's from Brisbane.

It was decided that I should prepare my two boats to make the trip as together they would be able theoretically to carry 8 passengers.  In addition, both boat trailers were reckoned to be tough enough to handle the notoriously challenging road conditions.

Following the autocratic principles of  "guided democracy"  the following menu for the trip was agreed to by the Yeppoon contingent:

Shopping for the menu proved a touch more problematical in trying to second guess the actual quantities that would be consumed by the individual members on the trip.  Inevitably, alot of excess catering resulted.  However, at trips' end most of the excess was able to be re-distributed to individual members.  I think the only items that were accurately quantified were bread and toilet paper!

The Brisbane contingent only arrived the evening before the day of departure.  As luck would have it the following morning  was somewhat blighted by rain which made the packing of the mountainous provisions and fishing gear  into the two boats and three vehicles that much more difficult. The light drizzle continued for most of the way to Stanage, adding a further 'slithery' dimension to an already treacherous  track.  A number of the tie down straps used to secure the boats on to their respective trailers succumbed to the rigours of the road and had to be replaced with ropes expertly tied by Harry and Les (I have still to master that bloody truckies knot).

It took 2-3hrs to get up to Stanage where some of us faced the bleak task of unpacking the mud-encrusted cars and boats in readiness for some fishing the following day.

The muddy car park at the Lodge

Stanage Bay and Thirsty Sound were named by Capt James Cook when he made his second landing in Queensland in 1770.  However, it was left to Commander Matthew Flinders during his historic circumnavigation of the continent  in 1802 to fully explore the area.

The Stanage Bay area was first settled by pastoralists back in the 1860s.  However it was not until 1948, with the permission of the local pastoralist, that the first holiday shack was built .  Over the ensuing years, Stanage became a popular permanent and semi-permanent retreat for fishermen and holiday makers.  The local Council initiated action to remove the squatters and their shacks in 1980.  Finally, in 1987 the Qld Department of Lands subdivided the area into a number of residential blocks and the shack owners were given first option to purchase prior to a public ballot being conducted.   Many complained then of the exorbitant prices being asked by Government for these blocks (today they sell for $300k+).

Today Stanage which has reticulated power, telephone  but no water, is home to probably no more than a couple of hundred permanent residents (professional fishermen and retirees) and an equal number of  persons who own holiday houses there or who just come to camp and fish.  Far from being a village of shacks and old wooden clinker dories, the 'township' has many fine houses many of which have 6-9m state of the art aluminium professional fishing and charter boats parked in the front yards.  Suffice to say there are magnificent reefs just 10-12NM offshore where one can catch all manner of reef fish while inside the harbour one can score barramundi, whiting, bream, salmon and of course mud crabs - but all, we later discovered, during the summer months from October through to April.

Substantial Dwellings at Stanage plus boats of all sizes

The township is spread between 3 'suburbs' all within 5kms of each other viz: Alligator Point (Beverley Hills) where the Barra Lodge is situated, Alligator Bay (Happy Valley) and Thirsty Sound (Plumtree) where there is the General Store, Pub and Service Station, Marine Centre, Coastguard and a concrete Boat Ramp protected from all South Easterly weather.

Our first venture out in the boats was the following morning to lay the 12 set crab pots we had bought with us.  After much discussion, it had been agreed that Qld mud crabs far preferred to nibble on a fresh and tasty Fowl (chicken) Frame rather than any sort of  quasi-doggy bone.   There were numerous mangrove lined creeks to choose from and we selected one about 5nm away from the ramp.  A local warned us to make sure we tied out pots to the mangroves on account of the large tides they had in this area - all of  4m during our sojourn!.

It was during this initial foray on the seas that I noticed that the 75hp Mariner was still a little sluggish and when we returned to the ramp discovered that one of its 3 spark plug leads had slipped off during the rough trip up.  While the wind had got up in the morning it tended to die down in the afternoon and this coincided with the high tides which  all  occurred very early in the mornings and mid-late afternoons.

Rain again next day postponed boating in the morning and instead some tried fishing off the banks at the nearby Porters Creek....only to score some juvenile bream.  Others took walks around the surrounding cliffs.  When the pots were checked that afternoon, only one keeper was snared and the rest were returned.

The following day saw seven of our company hit the water in both boats.  Again the fresh winds made it a little unpleasant initially but these later eased to permit some reasonably pleasant fishing conditions.  Alas the only fish on the nibble were some sand whiting, bream and juvenile trevaly and fingermark.

It should be sadly noted here that a certain lack of preparedness had resulted in one EPIRB being left back in Yeppoon while the other one was discovered to be out of date.  This inexcusable slackness meant that neither boat was legally equipped to venture more than 2 NM offshore thereby preventing us from fishing off the  island reefs only 10NM offshore.....hence we were all restricted to fishing in and around the estuaries in Thirsty Sound.

Same crew at the end of the fishing day

While neither boat had much joy in the fishing stakes, those that went and checked the crab boats again had even less good fortune - catching only a juvenile bream.  All pots were subsequently pulled and the smaller boat returned to the ramp.  However, those on the larger boat (myself, Neil and Lettie) decided to give it one more shot in a bay just opposite the ramp.  After about 45minutes we also gave it away and decided to return to the ramp only to find that the outboard would not start (no spark  and eventually a flattened battery)...we luckily attracted the attention of another nearby boat which agreed to give us a tow back across to the ramp about a mile away.  This was particularly frustrating as the boat had been performing so well ever since the incident of the floating spark plug lead.  At any rate that boat was not able to participate in any further fishing on the last day.

Des, Dianne and Harry - having a go!

Maria consumes one of the few fish actually kept

Les spent this day bashing his spine as he chipped oysters off the rocks.  There are in fact a number of oyster leases in the area.  Les' oysters were consumed that night with some avocadoes donated by a  Yeppoon orchardist (Kevin 07) well-known to a number of us.

While Des was originally intended to take another two out on the smaller boat the next day, he decided that he would instead prefer if I went out again and so it was that Maria, Les and I went out on the last day and managed to circumnavigate Quail Island which lies in the middle of Thirsty Bay - a trip of about 20NM in reasonable conditions, without any mechanical glitches, but again with lamentable fishing returns.

On our return we found the rest of our company in very high spirits and looking forward to their last night of partying at Stanage.  However, before this could proceed, the boats had again to be packed up and prepared for their rough journey home.  During a whim I checked the U Bolts on the big boat's axle only to find a couple of them loose and in need of the odd tweak; a practise I had to revisit several times during the return journey. 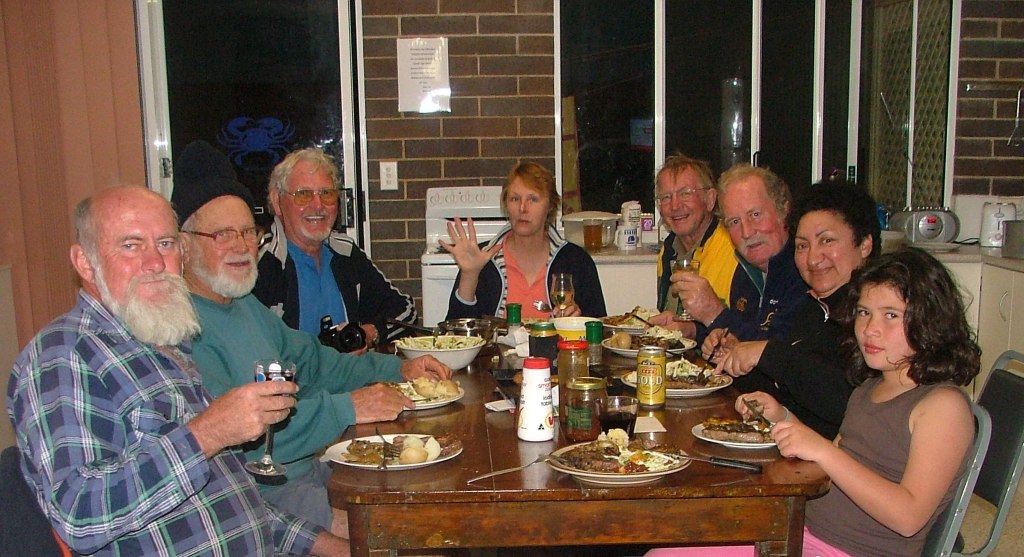 As can be gathered this was not a successful trip in terms of the crabbing and fishing but at least it gave us all an appreciation of the potential of the place for a further sortie,  perhaps in the summer months and when the road had undergone some grading etc.  The Lodge proved very amenable and should  be seriously considered by any traveller thinking of going up there with a group of six plus persons.

Back to Main Menu